“If we’re shaping the economy for 2050, we’re in a hurry when it comes to getting guidelines and frameworks in place.”

The European Parliament has been vocal in the circular economy debate, and recently voted in favour of an increased recycling target as part of the Commission’s action plan. Former Minister of the Environment for Finland Sirpa Pietikäinen is one of the driving forces behind the circular agenda in the Parliament, having acted as rapporteur in 2015, in the run-up to the adoption of the package. With the legislative process now underway, Circulate caught up with Pietikäinen to hear why she thinks we need to move from ‘end of pipe’ solutions to painting the full picture of an economy that works in the long term; why the circular economy isn’t just about materials but could offer a path away from populism and towards prosperity; and what we need to do to change the shape of the economy by 2050.

As the Juncker Commission took office, the European Parliament played a significant role in getting the package to its current state, and as Pietikäinen recalls, “there was quite a lot of pressure coming from various angles, both in the business and the political arenas. MEPs worked to ensure ambitions were kept high, while trying to make the circular economy concept more widely understood.” Pietikäinen, who is a member of the Committee on Economic and Monetary Affairs, is convinced the circular economy is the systemic change Europe needs in order to successfully enter the 21st century – and as such, she’s keeping a close eye on the way enabling conditions are being put in place. “The Commission is quite silent at the moment, yet I’m aware there is a lot of work being done in the background”, she says. “However we need more exposure of the concept, and to continuously show it’s a priority. Recently, the draft Plastics Strategy has been released, and we now expect to see a refined, targeted version of the document at the end of the year: it is for example important to push re-use rates, which I see as a stumbling block because they are way too low. But the focus cannot be on one material only, and it’s important for European institutions to show that the circular model has system-wide implications.”

Pietikäinen emphasises that circular economy is still too often used as a proxy for materials management, in a downstream or end-of-pipe fashion. “This is a pervasive phenomenon”, says the MEP, “we also see it at play in the food waste reduction debate, which very rarely seems to consider the source strategies – how we produce and distribute food – but mostly focuses on the end of the line.” This specific topic might not be the most visible element within the general circular economy debate, yet it’s important to remember that the European Commission has adopted the food waste reduction objective set by target 12.3 of the Sustainable Development Goals… and because goals need delivery mechanisms, it’s key to position circular strategies as an overarching framework and not a collection of niche applications. “One crucial factor, as far as I’m concerned, is to be able to connect all the dots”, Pietikäinen continues, “and that means painting the picture of the overall system: what strategies can be called upon to deliver the big ambitions that the Commission has for mobility, industrial policy, citizens, investment? Circular economy is not an isolated topic on the legislative agenda, it influences everything.” 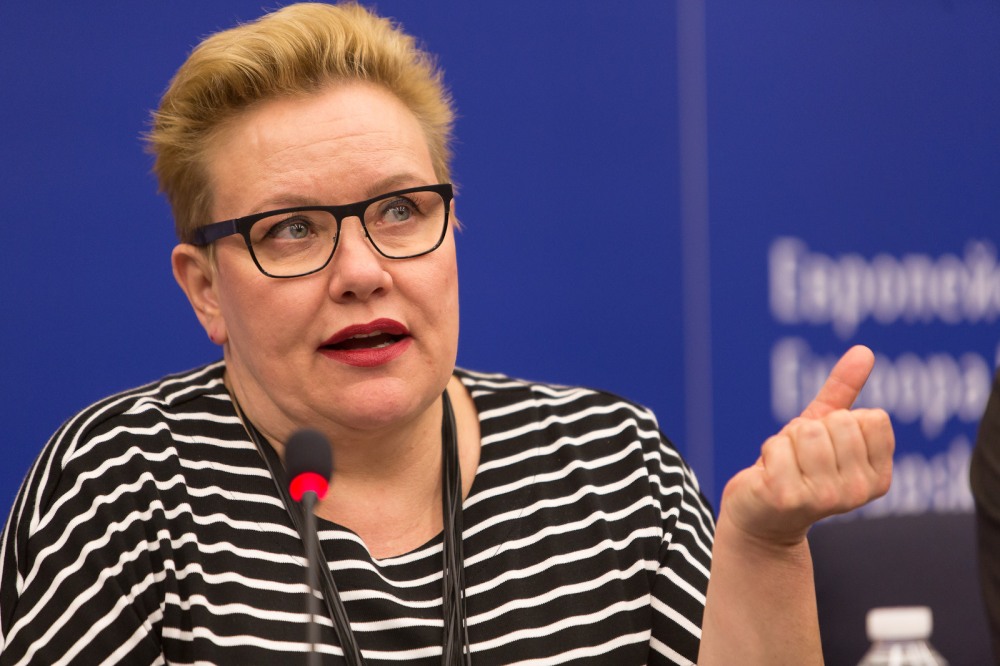 Having said that, the former environment minister also acknowledges the importance of a targeted approach, and is notably convinced that a thorough revision of the Ecodesign Directive would be a good way to start shifting the system: “The Parliament has been pushing in that direction, because using existing mechanisms is a good way to get traction.” Indeed, adding weight to the legislative apparatus by requiring new texts to be drafted and new rules to be created is an efficient way to generate immobility – so pragmatism should prevail. “Looking beyond the energy consumption of products (which is what Ecodesign has traditionally done) and taking into account criteria such as material choices, repairability or recyclability seems like a logical step for the directive, no need to reinvent the wheel when you can broaden the scope: by being thoughtful about what you put on the market in the first place, you reduce the need for costly clean-ups”, Pietikäinen argues. “It’s simply about designing out the waste and the negative impacts, and we have to keep stressing this point because too few stakeholders understand that this is precisely the core of the circular economy idea.”

Reaching that level of understanding will also help avoid linear lock-ins and “sunk investments, an example of which is incineration capacity in Europe”, says the MEP. “The signals sent by policymakers determine the level of uptake of the circular economy, to a certain extent. I think that businesses understand the notion and see their interest in it, but they want visibility in order to trigger large-scale programmes. The risk for Europe is that if it misses that boat, it might end up in a difficult position in the context of global competition… and we know that a poorly performing economy fuels populism. There are big choices to be made, and some level of disruption required. For example, we are still subsidising unprofitable coal mines: we can’t send a message that in essence says that circular economy is the future, while at the same time continue favouring the old extractive model.” Alignment is therefore central to the strategy, and as Pietikäinen emphasises, the crux of the matter lies in the fact that all stakeholders have to understand that the circular economy shapes society as a whole – it cannot co-exist with the current system conditions. “You can’t do a circular bit here and leave the rest as it is, hoping things will gradually catch. In that respect, it would be very important to see comprehensive national roadmaps emerge, as that would allow member states to learn from each other, and generate some emulation.”

The MEP, who is not known for being complacent when the going gets a bit tough with the Commission, says that national governments also have a responsibility and should lead by example – “It’s too easy to blame the Commission. When the level of ambition is too low or delivery is too slow, of course that needs to be called out, but when things are progressing then it becomes member states’ duty to move into implementation phase and send strong signals about the adoption of circular economy.”

Pietikäinen also underlines the importance of elements such as the innovation funds made available to member states, as well as Europe’s push for better channelled financing instruments. “Stranded assets and misguided or sunk investments threaten our pensions, it’s really important to build resilience and adopt long-term strategies”, she explains. This of course has an impact on accounting standards – can stocks be considered, in certain cases, assets rather than liabilities? If companies start looking at their products (vehicles, appliances…) as material banks and retain the ownership, how do models which favour throughput and ever-growing volumes sold stand in the way of circularity? “Getting these ideas to permeate is something that I spend quite of bit of time doing”, says Pietikäinen, “and I use concrete examples of companies selling services rather than products. It questions the notion of ownership, but also allows to make the connection between digital and the circular economy.” Pedagogy and pressure are the two instruments that the Parliament should use in its dealings with the Commission, according to the MEP, who says that currently her focus is on buildings: “We need to make sure proper plans are in place for this sector, since its impact is considerable both in terms of materials consumption and externalities during the use phase. The Commission is working on the topic, but the release of the official documents seems to be delayed – a bit like what’s happened for the plastics strategy. I’d issue a warning signal here, because time is of the essence. Between the adoption of a strategy and its proper implementation, it can take five years… and in five years a few significant investment decisions can be made: it’s therefore important to know where things are going as soon as possible. If we’re shaping the economy for 2050, we’re in a hurry when it comes to getting guidelines and frameworks in place.” And of course as always, the difficulty is to strike the right balance between ambition and feasibility: too much of the former leads to something that sounds nice but does not translate into a reality, and too much of the latter means watered-down objectives. Pietikäinen illustrates the point: “For example, we should set the target that a building renovation project needs to render it energy-positive, which implies incorporating renewable energy production in the process. Secondly, the target should state that the best available technology has to be used, taking into account efficiency, air quality issues, ease of handling after the first use phase, modularity…”

Doesn’t that sound like a bit of a handful for policymakers, who would have to come up with detailed and intricate pieces of regulation, at the risk of encountering hostility from the private sector – the infamous ‘red tape’ syndrome? Pietikäinen does not think so: “What’s needed is an overall objective, with a solid set of indicators. It’s a bit like accounting: no one tells you how much you can spend on hiring people, how to shape your supply chain or what budget to allocate to marketing campaigns. What you know is that you can’t end up in the red zone. The same logic applies here, you know you can’t be above a certain level of toxicity or below a threshold in terms of re-usability, for example. If you couple that with the obligation to use the best available technology, it means you don’t have to specify and qualify every single glue or polymer. That leaves room for innovation, and to go back to a previous point, the Ecodesign directive can be a powerful tool to set the standards – with the burden of proof on the producer: how do you demonstrate that your product is re-usable, non-toxic, repairable? This approach should be coupled with a hierarchy of post use-strategies, with recycling being clearly positioned as the last resort. At the risk of repeating myself, I strongly believe that acting upstream is the way forward.”